One of the major applications for Ferrite Junction components is a Base Station amplifier.  Each amplifier module may include several isolators, which typically provide mismatch protection.  In the case of the isolator placed between the power amplifier and the antenna, the primary purpose is protection against high levels of reflected power.  When the form factor of these isolators is drop-in, large termination chips attached to the isolator base plate are capable of absorbing up to 200W average power.

The ferrite materials used in isolators are fairly linear up to a few Watts.  Above this level, the most significant non-linear effect is third order Intermodulation Distortion (IMD).  This is the result of two (or more) signals of different frequencies F₁ and F₂ inter-acting in a region with non-linear transmission properties.  The third order components of the distortion products that may interfere in the receiver pass band are the difference frequencies 2F₁ – F₂ and 2F₂ – F₁.  Higher order distortion products are usually several dB lower in amplitude.  If third order products are reduced, the higher order products should also drop by a similar amount.

IMD is measured as the ratio in power levels between the distortion signal and the input signal, in units of dBc.  Typical IMD levels for isolators are about -80 dBc for two signal tones of 20 W each.  Usually ferrite isolators obey theoretical behavior for varying input signal levels, i.e. for each 1 dB change of input level, the IMD level changes by 2 dBc.

The generation and behavior of distortion signals can be worked out mathematically by assuming that the non-linearity causes an output expressed as a power series:

where a, b, c, and d are constants.  Vin is the input voltage which in the case of two input frequencies is equal to V₁ cos(ω₁t) + V₂ cos(ω₂t).  The phase can be ignored for this purpose, and inserting this expression for Vin into Equation 1 yields the following equation:

When the individual terms are multiplied out, the third order output is given by:

Collecting only the difference terms for the third order intermodulation distortion we get:

When the input signals have the same amplitude V:

The distortion level is proportional to V³, so that increasing the input signal by 6 dB will cause an 18 dB increase in the distortion level.  Because the output signal increased by 6 dB as a result of the input increasing by 6 dB, the increase in distortion level relative to the output is only 12 dB.  Similarly, a 3 dB change in the input power causes the relative distortion power level to change by 6 dB.  For example if two 100 W tones cause IMD levels of .001 mW, this is equivalent to a ratio of –80 dB between output and input, i.e. –80 dBc.  If the input levels were changed to 50 W, this would cause the IMD level to become –86 dBc.  Referring to Equation 4 in which the amplitudes are different, a 3 dB change in power level of the higher frequency (F₂) will cause the higher IMD frequency (2F₂ – F₁) to change by 3 dBc, and the lower IMD frequency to remain at the same relative level with respect to the input.

In practice there is typically more than two input signals, causing many more intermodulation frequencies.  With only four channels, the number of third order difference frequencies is 12, compared to 2 for the two channel condition.  There are, however, 27 three tone products of the type F₁ + F₂ – F₃.  These may have four times the power of the two tone products.  Not all of these will cause interference of course, but as the number of channels increases, the combination of in-band IMD gives rise to “spectral re-growth”.  The actual IMD level at any given frequency depends on the instantaneous phase and amplitude of the many individual distortion product frequencies.

Measurements tend to confirm that IMD signal levels change by 3 dB (i.e. 2 dBc) for each 1 dB change of input signal over normal operating power and temperature ranges.  The IMD level can be related to the third order Intercept Point (IP₃), where extrapolated lines of drive power (at 1dB/1dB) and third order IMD (at 3dB/dB) would theoretically meet.  To convert from third order Intercept Point to IMD values in dBc, the following formula applies on the assumption that the 3dB/dB law holds sufficiently well:

where IP₃ and Pout are in dB (dBm or dBW).

CAUSES OF IMD IN FERRITE DEVICES

The simplest IMD test is with two CW signals, though some specifications call for a more complex setup that mimics IMD performance in the overall system.  Generally a two tone criterion can be found that will assure compliance to a multi-channel or spectral re-growth requirement, as the physical causality is identical.  This allows the component manufacturer to keep a less expensive and more flexible IMD test bench.

Various schemes exist for combining signals from sources F₁ and F₂ for the two tone IMD test.  Two methods are shown in Figures 1 and 2.  In Figure 1 the two input signals are combined in the forward direction, as in a multi-carrier system.  In Figure 2 the second signal is applied to the output of the ferrite component.  This occurs typically in a Transmitter Combiner or where energy enters a Transmitter from a co-located Antenna and produces an IMD product.  The IMD produced by the second method will generally be different by the Isolation of the UUT Isolator from a common feed scheme having identical power levels.

Since the two methods often use Isolators/Circulators in the test bench of the same type as those being measured for IMD distortion, some care is required to assure accurate results.  Critical considerations are:

An identified IMD product should be verified by switching off one source at a time, making sure that its signal and the IMD signal both disappear on the Spectrum Analyzer.  IMD frequencies must be an integral multiple of the frequency difference between F₁ and F₂.  The Spectrum Analyzer should be adjusted for a noise floor 6–10 dB, minimum, below the expected IMD level.  When an IMD signal is lost below the noise floor, it may be necessary to slow the sweep, narrow the scan, and/or use averaging.  If the sources and Spectrum Analyzer are synthesized, synchronizing all three instruments to one of the Synthesizer 10 MHz clocks will further lower the noise floor.

Above-Resonance Drop-in Isolators fed with two +44 dBm common feed carriers, as shown in Figure 1, produce 3rd order IMD in the order of –65 dBc to –95 dBc depending on junction size and packaging techniques employed. 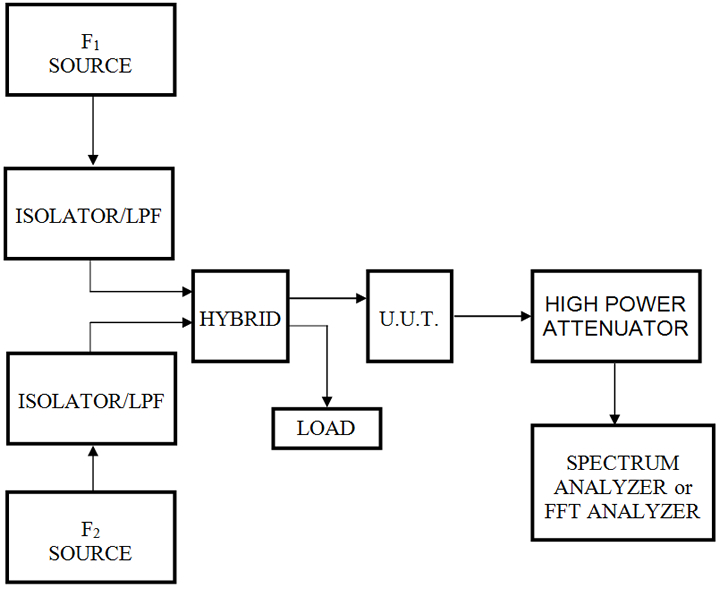